Good Sense for a Strong and Healthy Marriage: Part I 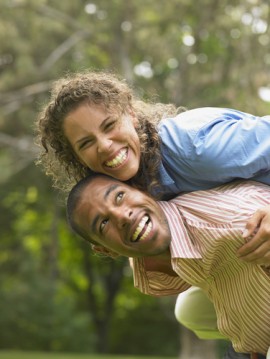 I recently returned from England. While there, I spoke with a woman who, after forty years of marriage, feels that she is in a constant uphill battle with her spouse. He doesn’t think they need marital healing or growth. While he doesn’t oppose her going to counseling, he doesn’t think he needs it. She is exasperated, wanting more from her marriage, but is unable to initiate change for them both because he doesn’t see any reason for it. She wants her marriage to thrive, not just survive; but at the rate they are going things seem to be heading downhill. I told her to think about St. Monica. After all, she can easily relate to her situation, because she also had a difficult husband. She responded with, “Yes, but St. Monica’s husband had the good sense to die, didn’t he?” Yeah, um, so the suggestions I will be offering will not include hoping your spouse kicks the bucket.

Sacrifice for One Another

The first thing needed for a strong and healthy marriage is the ability to sacrifice for one another. Jesus Christ demonstrates His love for us at Calvary—our Lord willingly and freely gave Himself to the Father, in the love of the Spirit, so that we could be in union with Him, others, and ourselves. This healing love of Christ covers a multitude of sins when we sacrifice in our marriages. Jesus’ selfless act upon the Cross changes our lives, forgives our sins, and casts them as far as the East is from the West (Psalm 103:12). When we sacrifice for our spouse, we are in fact loving them as Christ did on the Cross. Freely giving ourselves physically and emotionally are ways that don’t just idealize love, but it in fact actualize love.

What Can You Do?

Often, in the beginning of our marriages, we regularly and willingly make sacrifices, so as to express our love for them. Waking up early to prepare breakfast, putting money aside for months so that you could surprise your loved one with a trip, or even emptying the dishwasher without expecting a thank you, were ways we showed that the other was special. These little acts of sacrifice were easy at first, a natural overflow of the love we felt in our hearts. Over time, resentful feelings are entertained, often because we feel that the work we put in to our marriage is not seen equally in the other’s efforts and actions. When we begin to compare our sacrifices to our spouse’s, we transition to selfishness. There will always be a tendency to move from being the one who sacrifices to the one who is sacrificed for. The question is not about taking time for yourself and getting much needed rest or exercise; rather, it is about what you can do for the other to enable them to become the saint they are called to be.

In Part Two of Good Sense for a Strong Marriage, I will address the importance of service.

What are some ways you could sacrifice for your spouse this week?

Remember specific ways your spouse has sacrificed for you this past week, and thank God for your spouse and these sacrifices.

Chris Padgett is a popular speaker, musician, and author who has traveled around the world for almost two decades giving concerts, talks, and retreats to all ages about the love and forgiveness of Jesus Christ. A convert to Catholicism, he also teaches at Franciscan University of Steubenville and is pursuing a doctorate in sacred theology from the International Marian Research Institute in Dayton, Ohio. He and his wife, Linda, have nine children, many of whom are teens, and live in Steubenville, Ohio. To find out more, visit Chris' website: www.chrispadgett.com

Good Sense for a Strong and Healthy Marriage: Part IIYou Are: A Message to All Women