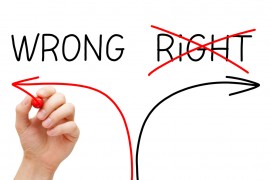 Right and wrong. True and false. Thanks to relativism, young people use these words when talking about things like math and science—but not faith and morals. You might be thinking, “Relatiwhatism?” If philosophical discussions aren’t your forte, stay with me! Relativism isn’t a philosophy you can afford to overlook, because it’s at the very heart of how virtually every teenager thinks about the most important things in life!

Relativism is the philosophy that there is no objective reality, but that truth is relative to what each person thinks. We’ve all encountered relativism in statements like, “Jesus is God for me, while Vishnu is God for someone else,” “You have your truth, and I have mine,” or, in regard to issues like the abortion debate, “You can’t impose your morality on another person.”

This “agree never to disagree” philosophy is considered necessary to guarantee peace, tolerance, and equality in a pluralistic world. Conversely, people who think we can know the truth in moral or religious issues are considered intolerant, bigoted, and sometimes even downright dangerous.

That caricature of us “absolutists” is reinforced at every level of society, not just among your teens’ peers. According to Justice Scalia, when it comes to the marriage debate, the Supreme Court has bypassed intelligent debate and labeled those who want to protect “traditional” marriage as “enemies of the human race.” Of course, we fail to live up to that label. In the 2,000-year history of the Church, you won’t find a single bishop on record calling for physical violence against gays.

Facts aside, perception is reality. And the reality is that people perceive those who believe in spiritual and moral absolutes as bigots. Perhaps that’s why, according to one study, 93% of teens said they do not believe in absolute truth. No one wants to be a jerk, right?!

Does believing in moral absolutes lead to hate?

If we want young people to receive the Faith as something more than “a belief system that works for me,” but rather “as something real that I’m called to conform my life to,” we need to show them that moral and spiritual absolutes don’t lead to hatred. In fact, history shows us that some of the most intolerant people in history were not real believers, but relativists!

Benito Mussolini, the fascist dictator of Italy, is one clear-cut example. Early in his political career, he wrote:

Everything I have said and done in these last years is relativism, by intuition. From the fact that all ideologies are of equal value, that all ideologies are mere fictions, the modern relativist infers that everybody has the right to create for himself his own ideology, and to attempt to enforce it with all the energy of which he is capable. If relativism signifies contempt for fixed categories and men who claim to be the bearers of an objective immortal truth, then there is nothing more relativistic than fascism. —Mussolini’s “Diuturna”

Since Mussolini didn’t recognize any objective reality—moral or religious—to which he should conform, he invented his own moral code and enforced it on everyone he could. If truth is really relative, why not?!

And while it might seem that if we could just “imagine there’s no heaven … no hell below us … no religion, too,” then we could “live life in peace.” The 20th century proved John Lennon’s dream wrong time and again. People in the 20th century who imagined that there was no “objective immortal truth”—no heaven, hell, and no religion—made many of the crimes committed in the name of faith look like child’s play.

Take communism, for instance, with its strong commitment to atheism. In one small communist country alone, Cambodia, 1.7 million people died at the hands of the government from 1975 to 1979, with entire families, including infants, being put to death by the tens of thousands if they were a perceived threat to the Communist Party.

To be fair, the average relativist wouldn’t go as far as Mussolini or the communists of Cambodia, but the modern world is increasingly full of examples of relativist intolerance toward those who believe in objective truth. Take, for example:

It seems that a new relativist inquisition is picking up steam. And, of course, it is being carried out in the name of “tolerance”!

Contrast these examples of intolerance with a “religious absolutist” whom most people remember: Mother Teresa. She believed beyond the shadow of a doubt that she was right and other faiths were wrong when it came to the divinity of Jesus Christ. But could you imagine new videos being found and released on YouTube of her kneeing a poor Indian in the face because he didn’t accept the message of Christianity? The idea is ridiculous. Her faith motivated her to a life of service to everyone regardless of creed or lifestyle—from feeding Hindus living in the slums of Kolkata to starting New York City’s first AIDS hospice and much more.

Of course, I’m not trying to rewrite history with this brief blog. People of faith have committed atrocities too. But an honest look at history shows that believing in a spiritual and moral absolute doesn’t make you a tolerant person, and believing in God and moral absolutes does not make you an intolerant person—and your teens needs to know that!

You know what makes you truly tolerant? Believing in the spiritual and moral absolutes and being convinced that violence against those you disagree with is wrong.

Jesus Christ is the perfect example of how to live that out. He never compromised with sin. It brought him to the cross. But he also never stopped loving the people he disagreed with.

How have I taught my teen moral absolutes?

What are some ways I can better teach absolute truths to my teenager?

Archbishop Charles J. Chaput has called Chris Stefanick “one of the most engaging young defenders of the Christian faith on the scene today.” Chris speaks to over 50,000 teens, young adults, and parents every year. In addition to his speaking, Chris has also co-authored, Do I Have to Go? (about the Mass), Raising Pure Teens, and Absolute Relativism. This 14-year youth ministry veteran served at the parish and diocesan levels. He is currently founder and president of Real Life Catholic. Above all, Chris is proud to be a husband and father to six beautiful children.

You Are: A Message to All WomenLet Me Be Me