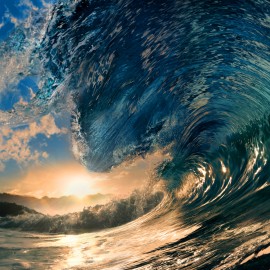 “In this culture, which is selling a lot of stuff, I had a father on his knees who was showing me how to be a man of God.” —Dan Vander Woude

I vividly recall the weekend in September 2008 when I learned that a father and parishioner in a nearby parish in northern Virginia had been tragically killed. According to a Washington Post article I later read, Thomas Vander Woude’s son fell into a septic tank, and Vander Woude dove into the tank and held up his son just long enough for another to pull him out. As his son was lifted out, Vander Woude’s eyes closed and he collapsed into the tank. On that day a devoted father passed away, but his son and his saintly legacy live on. By all accounts from those who knew him, his final act crowned a lifetime of loving God and neighbor. This selfless witness by a daily communicant and loving father of seven boys has had a powerful impact on me over the years.

As Catholic parents, few of us are called to lay down our lives in one such heroic moment for our kids. However, all of us are called to a daily, heroic struggle as we strive for holiness. As Vander Woude did throughout his life, are we cheerfully responding to that call in and through the particular circumstances of each day? Being a parent requires love, vigilance, and self-sacrifice as we seek to raise and form our kids in a secular culture that is increasingly hostile to Christian values. However, as the saying goes, more is caught than taught. Do we remember that our kids are constantly observing our response to the challenges of each day? We may tell them family is a priority, but do we demonstrate that in the way we actually spend our time? Or do we spend too much time in professional pursuits? We may say that faith is important, but do our kids see us living out an active, vibrant faith in our homes, workplaces, and communities?

One of my favorite quotes is from St. Francis of Assisi, who famously stated, “Preach the Gospel at all times. Use words if necessary.” This counsel is partly grounded upon the simple and timeless leadership principle of setting an example, modeling the way toward a good and worthy objective. In our roles as Catholic parents, we are specifically called to model the Way, as we resolve to lead our kids to Christ. Deliberate study and practice of the human virtues aids in that resolution. According to the Catechism of the Catholic Church, “Human virtues acquired by education, by deliberate acts and by a perseverance ever-renewed in repeated efforts are purified and elevated by divine grace. With God’s help, they forge character and give facility in the practice of the good” (CCC 1810).

These principles underlie a character education initiative I participate in, with the goal of bringing dads and sons together to promote growth in virtue. HeroicHabits.org is an informal father-son club that meets each month at the Augustine Institute’s cafe in Greenwood Village, Colorado. Using a mix of interesting speakers, contemporary movies, and small group discussion, we study and practice a human virtue each month. In the end, the goal is to “be all we can be” in discerning and pursuing God’s particular purpose for us in our individual lives.

Whether it be through a club or at home, parental modeling remains critical in raising virtuous kids. Our particular parenting approaches may vary, but our Christian calling is universal: we strive to be saints and raise saints.

In “The Way,” St. Josemaria Escrivá states, “Among those around you, apostolic soul, you are the stone fallen into the lake. With your word and example produce a first ripple…and it will produce another…and then another, and another…each time wider. Now do you understand the greatness of your mission?” Unpacking this consideration from a parental perspective, one could say our first ripples are our children. Let’s take our sacred mission seriously and each day strive through virtue to be a more perfect stone, so that like one of Vander Woude’s sons, our kids may one day also say, “I had a father on his knees, who was showing me how to be a man of God.”

Am I modeling virtue in my home to my children by the way I am living?

How can I teach the virtues in my family more explicitly?

Kumar is first a son of God, secondly husband to his beautiful wife, and thirdly father to three amazing adopted children, all of whom are siblings and teens (or tweens). He graduated from the United States Military Academy at West Point (many moons ago), and shortly after, converted to Catholicism. He loves to write on virtue, faith, and becoming an authentic man of God, and can be found at www.heroichabits.org.